Merc, Jupiter, Saturn, Neptune AND Pluto all retro, with Old Jove crossing my Sun while Kronos and the Lord of the Underworld tag-team teabag my Mars-in-Cap? Well, what better way to celebrate such Chaos… than by merging a few pre-2013 posts from the old place into this blog (backdated to the original publication dates)! I’ll pull those in over the next few days, and then likely pull in the few entries from the long-abandoned the bell mechanical blog(s) (‡).

Here’s the chart for “Now” (I’ll spare you my Synastry): 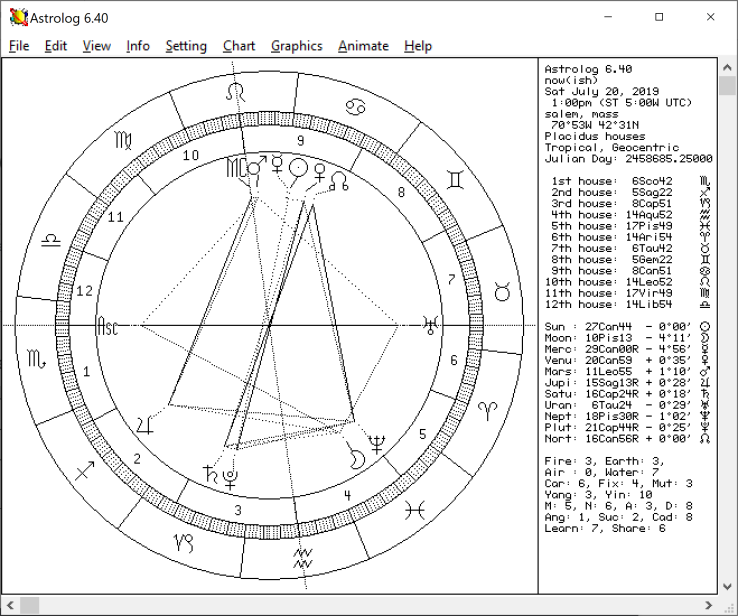 (Terrible time to be trying to sell one’s house, BTW…)

Meanwhile, Mars minds his own business, hangs out with my Moon over in Leo. They make nervous, quiet smalltalk.  “Fifty years ago today.” sighs Moon wistfully.  “What’s taking these monkeys so long?” says Mars, somewhat annoyed. (Behind them, napping Leo perks up an ear, then his whole head, yawns and stretches. “Merc retro, ‘cross Venus over the USA’s Natal Sun. (Yawns). Too busy hating on each other at the moment” he mutters, then rolls over to briefly expose his belly to the nearby Sun before falling back to sleep).

With the Apollo anniversary, so many of us have been marinating in Space Nostalgia for at least a couple of weeks.  Enough so that I don’t feel the need to comment on it very much.  I did acquire the remaster of Tom Hanks’ From the Earth to the Moon miniseries from 1998 (which I hadn’t watched, myself, until about 2005 or so). It can be strange to watch something from 20 years ago (“the pre 9/11 era”, as we call it now), itself making what is essentially a worshipful hagiography(†) for something from 30 years prior to that. (Also: Strangely uplifting).

‘Mythologized America’, I’ve taken to calling it: You start with the 1776 musical, watch a Lincoln movie, take a quick tour through Tara or Beula-Land before heading out to the Old West (Deadwood? Hell on Wheels? Or perhaps you prefer the old classics? Doesn’t much matter here). You may or may not spend a little time with Al Capone and Depression-Era Jimmy Stewart before landing yourself on the Beaches of Normandy (by way of Rick’s Café, of course).

And, from there? To the Moon, Alice. We go to the moon.

After that? Well, that’s right about when the whole damned Culture split off into multiple, often adversarial public fragments, isn’t it? All the Stories turned… Different, All the Dreams got Broken. And (apparently) all at once.

I do intend to spend some more time looking into that. (Among other things).

(‡) Too many little shards of me, scattered across too many wide little open spaces. Time to consolidate.

(†) Not necessarily saying this disparagingly, BTW: Worshipful hagiography can be quite therapeutic!

http://the-mjl.com View all posts by mjl

A blog about
not eating peanuts in church.

Music is over here.

my most recent amazingly insightful tweets…